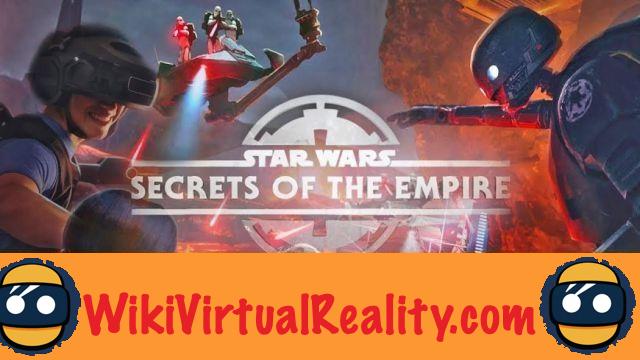 Developed in partnership by Disney, Lucasfilm, ILMxLab and The Void, is one of the most ambitious projects ever undertaken in the virtual reality sector, and more generally, in entertainment. This attraction offers a group of 4 users to take part in a real adventure worthy of the films of the famous Star Wars saga. Visitors are equipped with virtual reality headsets, a PC worn as a backpack, and accessories allowing them to interact in VR.

Star Wars: Secrets of the Empire, a VR attraction of unprecedented scale

However, there is no question of living the experience of sitting in a seat or in a small space. Secrets of the Empire takes place in a large warehouse, fitted out to match the decor seen in virtual reality. Users can move freely within this huge space, which provides an incomparable feeling of immersion.

Concretely, if the user sits on a seat in a spaceship in the VR, a seat will be present in the same place in the real world. Anything seen in VR can be touched in the real world. In addition, environmental sensory effects have been added for even more realism. The freshness of the wind, the heat of the lava can be felt in real time.

The first media who had the chance to preview this attraction were simply amazed. Unfortunately, for those who wish to try this experience of a new kind, it will be necessary to go to the Disney World and Disneyland theme parks in Orlando and Anaheim. The attraction will be offered exclusively in these American parks. At least, that's what had been announced so far.


The VOID has just created the surprise by announcing that Star Wars: Secrets of the Empire would also be exported to London, more precisely in the district of Sheperd's Bush at the Westfield shopping center. Like at Disney World in Florida, the attraction will open in England on December 16, 2017. Tickets can be booked now on The Void's official website for £ 32,50 per person, or around € 36.