The importance of SideQuest for the Oculus Quest

Curation has regularly been a fundamental issue for the Oculus Quest. Finding good content that is original is not the strong point of the Facebook system. SideQuest represents a real opportunity

In 2013, before the takeover by Facebook, Oculus already offered Share, a system based on recommendations. Now it is on the official store that some content is highlighted. They are generally very good. But to have new things, things to test, it is to the parallel platform that we must turn. 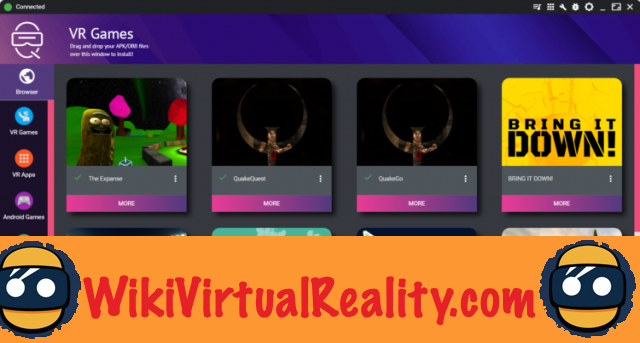 To understand how essential the platform is now for users (those who know it anyway), a few examples suffice. Virtual Desktop, rejected by Facebook is present there. Before the Oculus Link we could already stream. We could also find a temporary experiment that allowed us to discover the original Half-Life game in virtual reality.. Until recently, in December when Facebook launched its experimentation with hand tracking, it was on SideQuest that we saw a large number of demos unloaded which made it possible to quickly explore the potential of this innovation.

If we stayed on Oculus Quest, the tests made possible were then limited to the menu. Above all, for Facebook, it is now also a question of image. As the giant's stranglehold on the Oculus system grinds teeth, the openness made possible by SideQuest, the feeling of being on an "Open" platform, then makes it possible to change things. In fifteen minutes, anyone can become a developer. Thus giving free rein to experimentation. Note, however, that the game Crisis VRgade, the most downloaded game on the parallel platform has just been refused, for the second time, by the official Oculus Quest store.