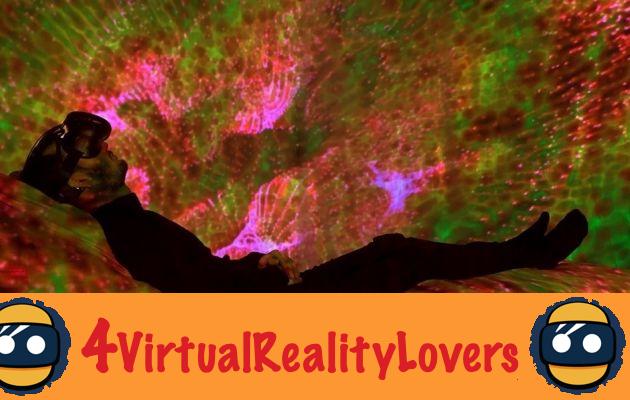 Insomnia is a real problem for many people who cannot sleep soundly. Globally, it is estimated that approximately 20% of humans are affected by this sleep disorder. Fortunately for them, virtual reality could finally allow them to find rest ...

Researchers from the Royal Melbourne Institute of Technology (RMIT) University have just teamed up with artists to create a VR headset specially designed to induce sleep. Called ”Inter-Dream“, this device combines ambient music with kaleidoscopic visuals directly controlled by the wearer's brain waves using an electroencephalogram.

Until now, only a few VR headsets integrate an EEG. This is the case of the LooxidVR dedicated to medicine, or that of the XTAL VRGineers, a $ 5000 headset reserved for professionals.

En depending on the user's brain waves, constantly changing, visuals and colors change. The result is a spectacle of lights, shapes and colors that, in addition to being beautiful, could allow insomniacs to doze off.

Indeed, many studies tend to prove that people whose brains are more active before going to bed will have more difficulty falling asleep. By presenting more vibrant visuals to people with more intense brain waves, Inter-Dream aims to appease them and teach them to calm their minds.

First conceived as an artistic project by PluginHUMAN, this atypical VR headset nevertheless attracted the attention of researcher Nathan Semertzidis from the Exertion Games Lab at RMIT University. The latter decided to analyze the effects of Inter-Dream on users, and found that the device could cause a 21% drop in negative emotions and a reduction in fear of 55%. On the contrary, positive emotions increased by 8% and feelings of serenity by 13%. In theory, all these positive changes should improve the quality of sleep.


The first results are therefore very encouraging, and could enable millions of people to overcome insomnia. However, researchers say more testing is needed to verify the product's benefits before considering marketing ...