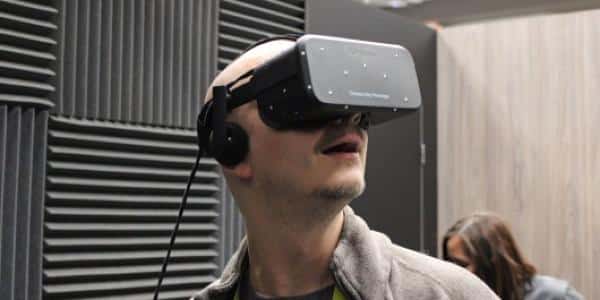 A new device becomes compatible with the Oculus Rift augmented reality headset! The iMotion motion sensor, currently in the works on the crownfunding Kickstarter site, initially aims to simulate a mouse using a small box with 3 diodes that you scratch around your hand. However, the developers want to make their sensor a much more versatile device. On their Kickstarter page, we can see an image of a person with the Oculus Rift headset around their head with a sensor hanging from their pants. In addition, it is possible to connect 4 sensors at the same time, which can increase the possibilities of the device. Imagine, a sensor on the right hand, another on the left hand, a third on the left leg and the last on the right leg: one could eventually become a football player! In short, the iMotion is very interesting and has great potential, and is well on its way to achieving its goal of $ 100.000 (currently just over $ 50.000).

For information, the creator of the project, Alex Khromenkov, admitted that they had not yet found the design of the final product: it is not necessarily very pleasant to wear sensors in the hands, even if it is functional. and virtually no latency. Each sensor has two buttons on the edges to adapt the devices to left-handed and right-handed users, just press it with your thumb. If these buttons are used as left click and right click in the case of a mouse, they can be used in another way. They showed use of their iMotion on a first-person shooter, with the edge buttons being used to reload and the fingers passing in front of the sensors making the character shoot. It's a brief demonstration but it shows that with good developers, it will be possible to do great things!

add a comment from The Kickstarter site often gives birth to potentially interesting projects. We're going to take a look at the iMotion motion sensor!