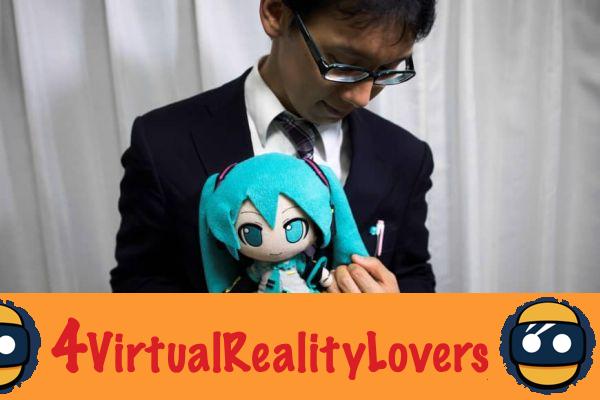 If virtual reality is still struggling to make a place for itself in France and Japan, it has become commonplace. The proof : 35-year-old Japanese man just married virtual singer Hatsune Miku.

For those who ignore it, Hatsune Miku is a very popular virtual character in the land of the rising sun. It is originally a text-to-speech application developed by Crypton Future Media, and embodied by an avatar bearing the image of a 16-year-old girl with turquoise hair. Thanks to her voice synthesized from that of actress Saki Fujita, Hatsune Miku is able to sing and very many artists have created JPop songs using this software.

First represented as a 2D image projected on a DILAD screen, this virtual singer was then transformed into a hologram by Gatebox. Likewise, a virtual reality application available on SteamVR allows you to enter the world of this artificial muse.

Hatsune Miku unleashes passions, and Akihiko Kondo went so far as to marry her. The marriage is not legally recognized, but the XNUMX-something still spent more than 15 euros to organize a sumptuous ceremony at Tokyo Hall. More than 40 guests joined the event, but his mother refused the invitation ...

Since it was not possible to take the hologram to church, Kondo put the ring on a soft toy with the character's image. The consecration of a true love story.

Indeed, for 10 years, Kondo has lived with the hologram floating in its $ 2800 Gatebox. She wakes him up every morning to send him to work in a school administration, and turns on the lights when he announces his return home by phone. In the evening, she reminds him to go to bed. At night, he sleeps with his stuffed animal and cherishes it with all his heart.


The firm that produces the hologram, Gatebox, issued to Kondo an "inter-dimensional" marriage certificate. Indeed, this Japanese is not the first to pass the course of the virtual union. More than 3700 certificates have been issued so far. The XNUMX-something has also received many messages of support.

And Kondo is the standard bearer of a cause. In his eyes, there surely exists many people who do not dare to marry the virtual characters they are in love with. He wants to support these people.

According to him, it is strictly impossible in his mind to fall in love with a “3D woman” (a real woman). He thinks being part of a sexual minority who is not attracted to other human beings. According to him, forcing him to seek love from a real person would amount to forcing a homosexual man to enter into a relationship with a woman. So, Kondo claims to be very happy with his virtual wife who doesn't age, die, and cheat.

However, this unusual anecdote reflects a disturbing social phenomenon in Japan. While one in 50 men was single at age 50 in the 1980s, it is now the case for one in four men.

A statistic which may be explained by the tension of the relationship between men and women in Japan. Indeed, Kondo himself suffered a lot before he ended up marrying software. He was often treated as an "otaku" (manga enthusiast) by young girls in his teens, before being hazed and harassed by a woman at his workplace. Today, he considers that ”Miku-san” is not only the woman who loves him, but also the one who saved him…