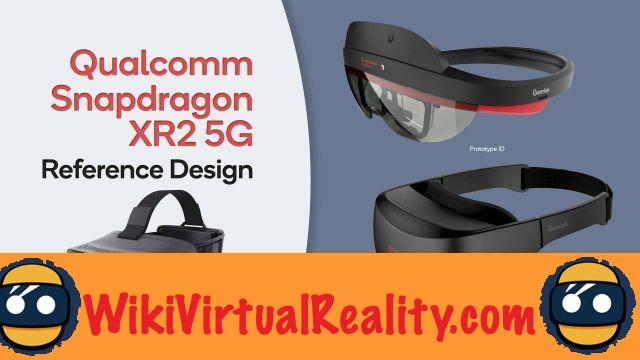 At present, more than 30 VR / AR headsets embed Qualcomm's Snapdragon chips. These devices include the Oculus Quest, the Oculus Go, the HoloLens 2, or the Vive Focus. The American chipmaker is therefore a major player in the immersive technology industry.

At the end of 2019, Qualcomm unveiled its new Snapdragon XR2 chip dedicated to mixed reality. This chip was intended in particular to allow VR / AR headsets to benefit from a 3Kx3K definition per eye at 90Hz, 5G connectivity, and up to seven camera streams simultaneously for inside-out tracking.

Now the firm unveils a new benchmark design for VR / AR headsets with the Snapdragon XR2. This new VRDK design offers an overview of the features and functionality that will be offered by the standalone headsets that will be launched in the coming months.

This reference device presents a basic and imposing design, facilitating its production, but includes all the features made possible by the XR2 to allow testing.

Thanks to this new VRDK, we now learn that helmets equipped with the XR2 will allow support for hand-tracking without a controller just like the Quest. Tracking of Atraxa magnetic controllers will also be supported, as will Tobii eye-tracking.

At the same time, Qualcomm is also unveiling reference design prototypes for industrial VR / AR headsets. Finally, the American company confirms that it has developed an end-to-end solution for rendering VR content via the Cloud and 5G.


Manufacturers will therefore be able to add this revolutionary feature to their devices, even if we will have to wait until 5G networks and Edge Computing are democratized to finally enjoy it ...