Augmented reality is everywhere ... even on our plates! The start-up Kabaq has created a mobile application allowing restaurants to offer menus in augmented reality. Using their smartphone, the user only has to scan the dish of their choice on the menu to display it. a 3D representation superimposed on its real environment (on the screen).

This invention allows restaurant customers to preview the different dishes from all angles offered by the establishment. They can thus make their choice more easily and without risking unpleasant surprises when the waiter brings the order.

Of course, the 3D models are created from real images of the dishes prepared by the brand. The menus are created using the photogrammetry technique, which consists of taking several photos of the same object from different angles to recreate it in 3D. It is therefore not a false representation.

The other major advantage of this application is to allow decipher the menus during a trip abroad. This is how the idea germinated, when the founders of Kabaq tried to describe the dishes offered by a Turkish restaurant to friends.

In addition, restaurants can also integrate information such as price, weight and nutritional characteristics dishes. Finally, this technology will make it possible to create virtual menus greener than paper menus.

Restaurants: AR menus will be compatible with Snapchat and Facebook 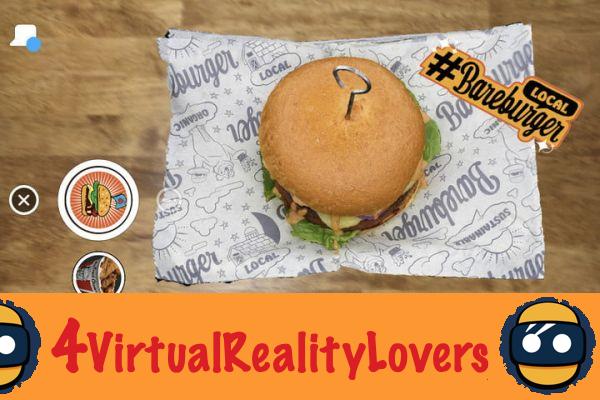 If Kabaq develops its own application, the AR menus will also be compatible with the different applications offering augmented reality features. For example, it will be possible to scan them with Snapchat World Lenses or Facebook Camera. Since these applications are already widely used by many consumers, Kabaq believes that this integration will facilitate the democratization of its invention.

Rather than having to install an app specifically to view a specific restaurant's menu, users will only have to scan a Snapcode to bring up the AR menu. However, restaurants and chains can also choose integrate augmented reality features into their own applications. This will allow them to entice customers to download them.

La Bareburger fast food chain will be one of the first to offer this innovation in its restaurants in the United States and Dubai, from April 22, 2018. It has chosen to use Snapchat to offer its menus in augmented reality.

They will no longer even need to actually order a dish to take a picture and share it on social networks. Well in its time, therefore, this concept of menu in augmented reality seems to be successful and should quickly spread in many restaurants around the world.

Steam VR: how to fix bugs, errors and issues ❯