The five VR games not to miss during the Steam sales

If we pay particular attention to the Steam sales at Christmas and before the summer holidays, we must not neglect the rest of the year. Thus, it is on the occasion of Chinese New Year that Valve's platform offers interesting promotions. Virtual reality, in particular, is not left out with several productions ranging up to -50%. For you, we have selected five games that stand out and take advantage of a more than appreciable price drop.

Superhot VR: the game that makes you a super assassin at -25% for Steam sales

Well known to virtual reality enthusiasts, Superhot is one of the first games to have succeeded his transition to VR. With a graphic style of his own, he puts you in the shoes of a character alone against all. Its biggest particularity comes from the fact that time only advances when the player moves. A game that we recommend without reservation and which is currently at -25% on Steam, or 17,24 euros. Note that the pack including the “classic” version, VR and the “Mind Control Delete” extension is available -41%. For 34,41 euros, you can jump in with your eyes closed.

Serious Sam: an explosive saga at -50% during the Steam sales

After a long day of work, whether in an office or in class, you often want to release the pressure. For that, what better than shoot monsters and demons with a shovel ? Serious Sam then acts as a holy grail, especially in VR. During the Steam sales, it's not a game, but four that are on sale. Indeed, all products in the range benefit from a 50% reduction, each passing to 18,49 euros.

Bullets and More VR: a competitive FPS in virtual reality at -40% 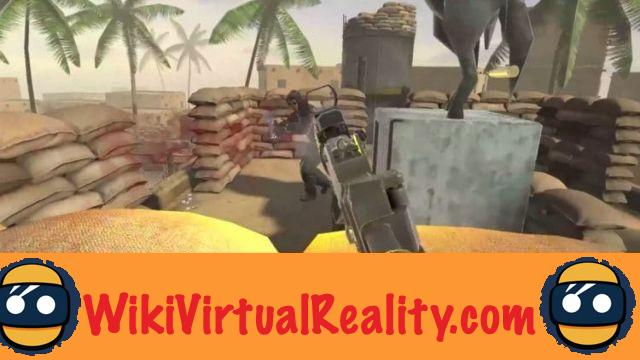 If you want to shoot each other in joy and good humor with your friends, Bullets and More is for you. This Competitive FPS VR takes the codes of the genre to transpose them into virtual reality. The principle is as simple as you might expect: two teams face off, only one winning fate. The classic modes such as the Deatmatch are of course present and will have something to occupy the most determined players. During the Steam sales, it lower its price by 40% and go to 8,99 euros.

The Talos Principle: ready to heat your brains for less than 20 euros?

After you've been treated to some action and explosions, it's time to move on to a more cerebral game. Indeed, the Steam sales do not only highlight shots and firearms, The Talos Principle being the proof. In this one, we must rsolve many puzzles, with lasers or magnetism. Already appreciated as a “classic” game, its VR version has successfully transitioned and offers immersion that adds a real plus. The game is currently at -50% on Steam, or 18,49 euros.


Keep Talking and Nobody Explode: the perfect mix between reflection and cooperation for less than 10 euros

In many ways, Keep Talking and Nobody Explode is a unique game. If it is indeed virtual reality, only one of the two players wears a helmet. The other is satisfied with a heavy manual explaining how to defuse the bomb. Between reflection and cooperation, there is enough to go through all the emotions, from stress to bursts of laughter. With a -60% reduction during Steam sales it only costs 5,99 euros. No excuse not to jump on it.