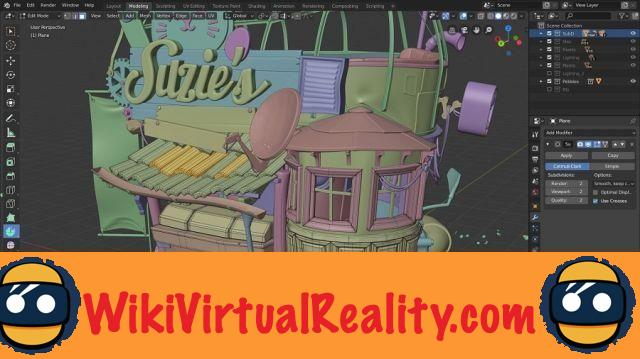 In its next update scheduled for the end of May, the Blender software will integrate a virtual reality component. In fact, at first, it should be possible to "enter" into its creation and approach it. This will allow you to see the 3D models up close, at the right scale and from all angles. For VR game developers, this is the way to check directly from a headset all the stages of their creation, until the final version. In addition, this should accelerate the process of developing VR experiences.

Support for VR in Blender is added through the OpenXR API. This allows run the software on all headsets that are compatible with. However, OpenXR, although still little used by the general public is very widespread among VR developers. They will therefore have access to the inspection function which is only the beginning of entry into the world of virtual reality of Blender.

Soon all the stages of 3D modeling in VR?

Indeed, other functions will be available later. Without giving further details, one of the developers of the 3D modeling software said that several people on the Blender team are very interested in virtual reality, just like augmented reality. However, this tool is still very complex. Its functionality in VR may therefore be reduced. However, it is not impossible that in the future all creation in 3D could be carried out entirely in VR.

Note that it was already possible to interact with Blender in virtual reality thanks to an unofficial plug-in. As interesting as it may be, it still does not guarantee compatibility with all helmets. This is the advantage of the OpenXR platform which is used on a wide range of different hardware.